At Barn Wood Furniture we make dreams come true. Just tell us what you imagine and we will turn into reality. Anything from beds, tables, chairs, trunks, swings and ordinary furniture, to walls, ceilings, light fixtures, bars, cupboards and book cases. 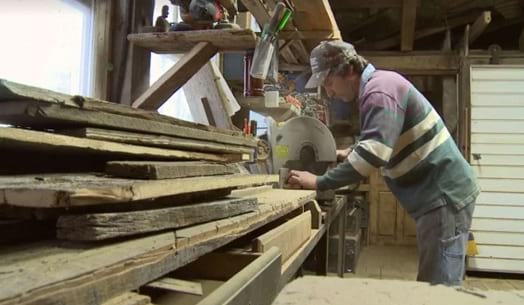 WOOD TELLS US A STORY

I like to stay busy, so I usually have something I'm working on that you can check out. Folks are welcome to come by & plan their project with me. I build quality rustic furniture that looks good and will last for years.

After working in construction for over twenty-five years, Eddie and his brothers were feeling the effects of an economic slump. With work being slow he worked on various projects in his back yard shed. One day, a friend stopped by with a load of barn wood on his truck and told Eddie he thought maybe he could use it for something. Eddie told him, “If nothing else, I can always use it for kindling.

Eddie took some of the wood and built some Adirondack chairs out of the old barn wood. He gave some of the chairs as Christmas gifts and with the help of his wife they listed some on Craigslist and Facebook. Then a lady contacted him for a custom barn wood bar to give her husband for Christmas, that led to also ordering barn wood barstools. They started a Facebook page and began building and listing items on Craigslist.

It did not take long for them to begin having orders that kept them busy along with finding barns to obtain the barn wood. Not really having any working capital they were lucky to barter for some barns by building the barn owners some barn wood furniture. Eddie had experience with taking down storm damaged parts of houses and repairing the house to restore it. He applied that knowledge to take down barns safely. He would take the boards off the barn and his wife would stack them on their truck and utility trailer. It was tedious but heavy work. His wife, Sonja, laughs and says that when she complains about the barn wood boards being heavy, he tells her, “Yep it’s heavy, just keep on putting it on the trailer.”

The backyard shed quickly became crowded with barn wood stacked everywhere there was a spot to put it and Eddie added on for more storage space. Building the furniture took a large worktable that he added onto as needed. Eventually, Eddie built on a larger room that made the old barn and shed one big L-shaped structure. In the winter, Eddie fashioned a wood stove using an old hot water heater to heat the new space. While Eddie built the furniture, Sonja would keep the fires going and pull nails from the barn wood boards. Eddie often remarked that “after all the years framing houses, I can’t believe I’m building furniture. I love what I’m doing now.”

Part of our job is to find barns that have fallen down, are about to fall down, and are not rotten. We drove by a barn near the Tennessee state line several times going to and from Fayetteville where we were doing some work.

Every time I drove past it, I’d say something about how much I wanted this barn that was damaged. We were coming back from Fayetteville one day and my wife/secretary listened to me wish then told me to turn around and see if we could locate the owner.

I couldn’t get anyone to the door so we left a note. On our next trip we stopped again at the house with the tractor. After knocking longer than I wanted to, a man came to the door and looked suspiciously at me and wasn’t very friendly.

He said they had people asking about the barn all the time and looked like our conversation was over. I quickly pulled out my phone and started showing him photos of stuff I had built. He stopped me and said he needed to get his wife. She came out, looked at some of my pictures, and said this was just what she wanted.

Love, love, love my new TV Stand/Entertainment center! I cant wait to get my next piece of furniture from them! Thank you so much Eddie Abernathy!

*****5 STARS***** Eddie did awesome work! We wanted something very specific and he nailed it. We wouldn’t hesitate commission him again!

Eddie is a true artist! With only some measurements and pictures, he created a beautiful dining room table, hall tree desk and foyer table for our home out of genuine reclaimed barn wood. He even fashioned the drawer pulls and slides from wood. We highly recommend his work!

After building houses and repairing damaged houses for years building furniture was a whole new ballgame for me. When ordering lumber to build a house the wood comes in certain dimensions and it is possible to estimate how many 2x4 studs will be needed, sheets of plywood, and so on. When you start to build something using old barn wood there are no set dimensions of the wood used. I quickly learned that it must be rare indeed to find boards taken from an old barn that are the same length and width. The thickness of the boards can go from two inches at one end and one inch at the other. If the barn boards were the same when it was built, they do not remain the same as they weather and age. I also learned that each board must be inspected for soundness to make sure it will be strong enough to last. I have had to destroy barn wood that was found to be rotten or damaged beyond use. I also built a kiln to be able to destroy anything living inside the wood and to dry out wood as needed. I love taking the old barn wood and creating a piece of furniture that a family can enjoy for years. Most of the wood is oak and poplar, and there is also pine, hickory, cedar, walnut, chestnut, and even sassafras. Sometimes I get some beautiful beams and posts.

I have been a carpenter since I was a child and 2020 marks my eighth-year building barn wood furniture. The furniture I build is rustic, sturdy, and should last for generations. The people that become my customers are some of the best people I have ever met, and many have become friends who come back when they have a new project. People from eleven different states have bought barn wood furniture from me and all the feedback has been positive. Unique pieces are an enjoyable challenge and I love to build a piece that fits a space perfectly. To see someone’s eyes light up when they see what I have built for them is priceless! I have even totally transformed the inside of a restaurant, built custom bars, murphy beds, and just about anything that can be built out of barn wood.

One day a student at The University of Alabama contacted me to see about interviewing me. He was in school to work in television and needed to make a video for a course he was taking. The class had been instructed to make a short film about someone in Alabama. WVUA had a series called “My Alabama Life” where interesting people talked about their life in Alabama. I did not think I was all that interesting and really did not want to be video recorded. My secretary told me that I better go for it for free advertising and that she thought it was interesting. I was incredibly nervous but went ahead with it. The student came up one day and spent several hours recording me doing various things. I was supposed to say, “I’m Eddie Abernathy, owner of Barn Wood Furniture, and this is my Alabama life.” It took me five tries to just say that one sentence! He later told me that his instructor thought the video with me was one of his favorites and that made me feel rather good. Another customer was on Barnwood Builders because they built a log cabin for her and I had built several pieces for it including a vanity, kitchen island, cabinet, and Adirondack chairs. Then she called to tell me they wanted me to appear on their show. Again, my secretary encouraged me to do it. It was fun meeting Mark Bowe and a cool experience to be part of one of their episodes. I feel blessed to work building barn wood furniture and appreciate everyone who has been a part of it. 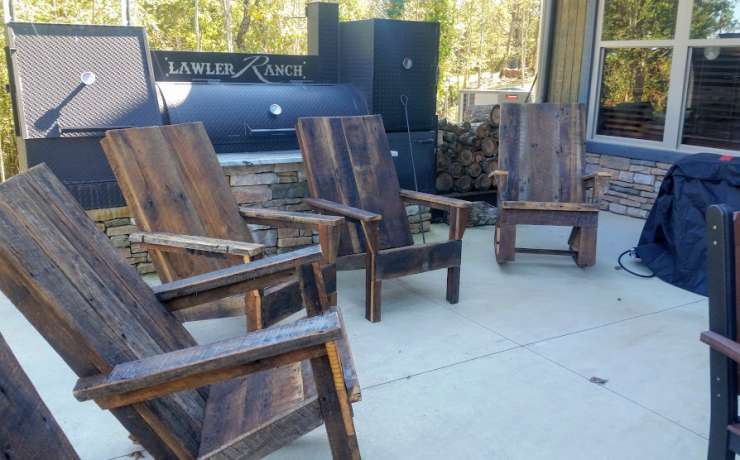 Among our Fall 2021 Projects are a Sliding Barn Door and Vanity that went in a beautiful new home. We also turned out a lot of these Custom Barnwood Chairs. These pictured below, went in… 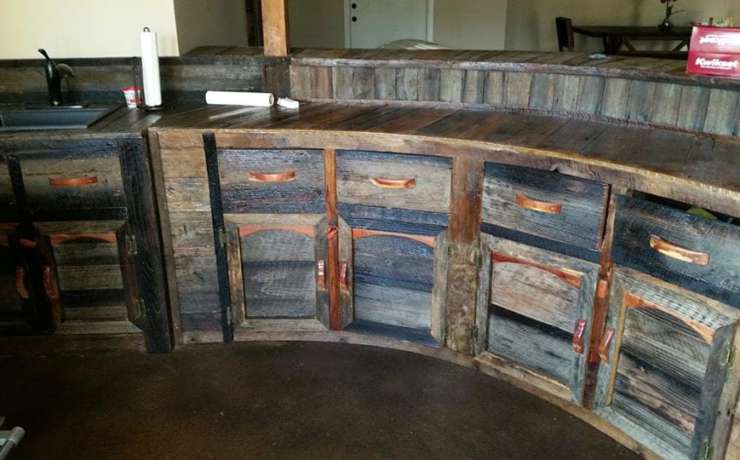 After working in construction for over twenty-five years, Eddie and his brothers were feeling the effects of an economic slump. With work being slow he worked on various projects in his back yard shed. One… 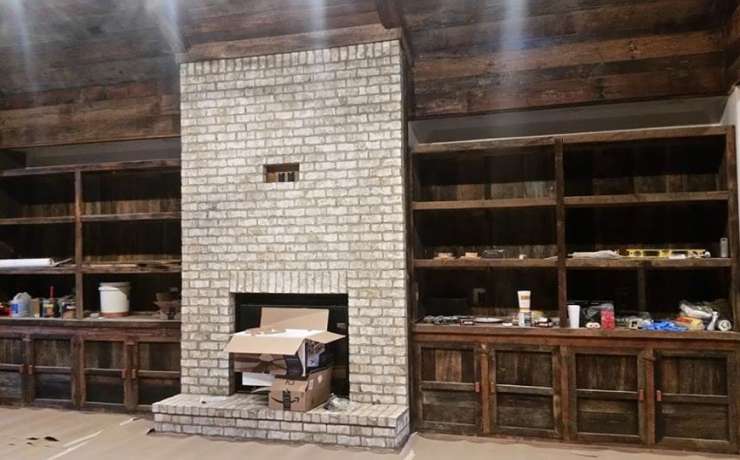 There are many uses for barn wood in a cabin. It can be measured and customized to fit any wall interior or exterior containing windows and doors, and can also be used to cover the… 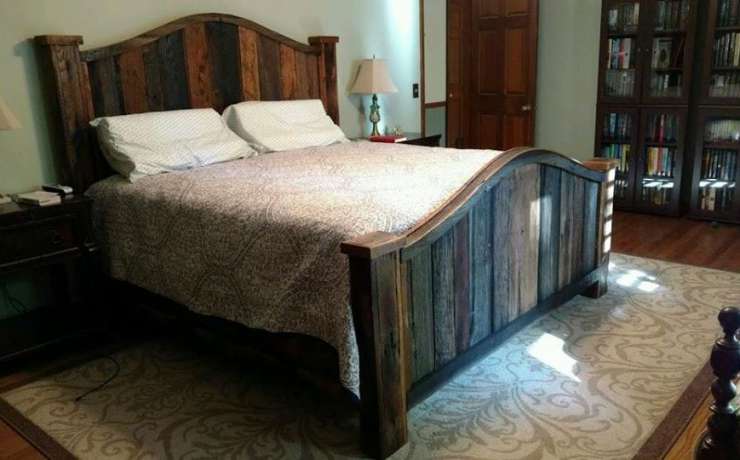 The bedroom is a special place in the home. It is the place we feel most comfortable and at ease. This may be the reason something feels amiss when we spend the night somewhere else,… 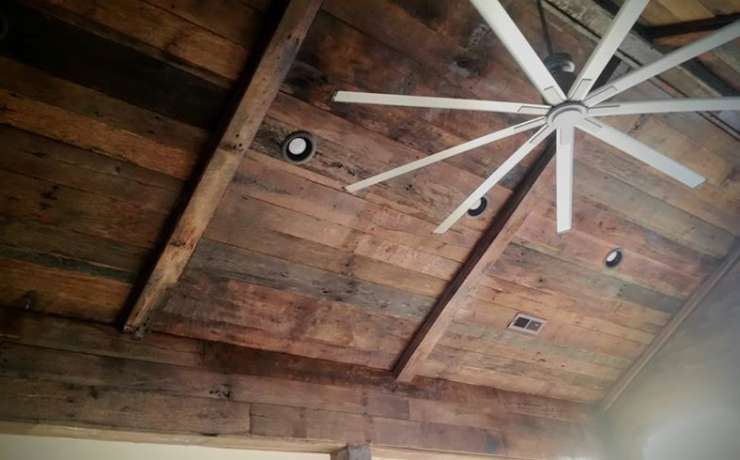 A Variety of Recent Items

Here are some miscellaneous items including a bed, bench, desk, doors, hunting cabinet, TV stand, cabinet and even a garbage can! 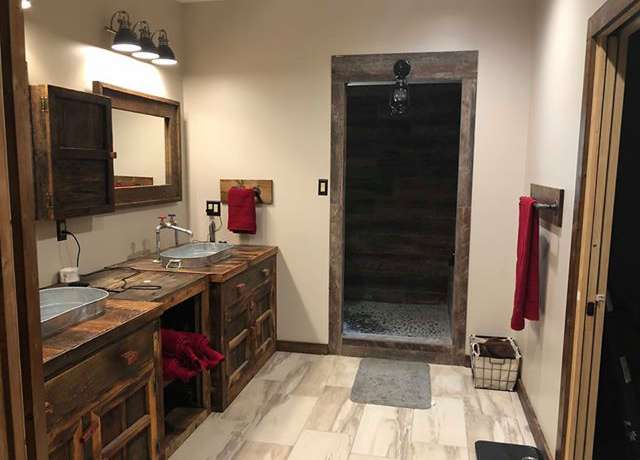 Bringing the elegance of repurposed, unique wood designs into the bathroom provides beauty, individuality, and the opportunity to actually relish and be proud of every room in your home.

We Custom Make Every Piece

Let me know what you need and I'll build it for you at a reasonable cost. Plenty of photos here to get ideas.